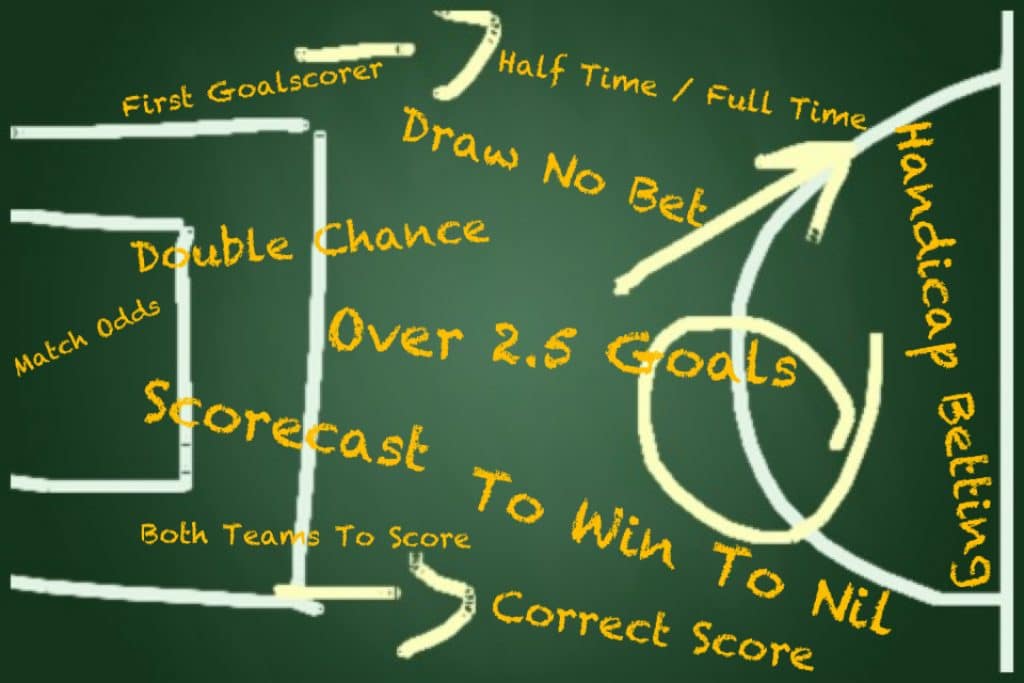 The types of football bets facing any punter may be cause for confusion. These days, there are many different ways of betting on football matches. The majority of people only bet on the final outcome of a game based on 90 minutes.

However there are several other ways that you can bet to on football games. In this article, we will explain some of the most common types of football bets.

Once you understand the different types of football bets available, you will be able to make a better judgement on which type of football wager best suits you. This in turn will aid you in making more money from your betting on the great and varied game of football. Read on for our exhaustive football betting guide.

Types of Football bets – The Top 10

Let's now take a look at the Top 10 types of football bets most punters make and explain each one briefly.

It is also referred to as over/under and it is essentially a two-way bet regarding whether the total number of goals scored will be more than the one quoted or less. In most cases, the bet appears to exceed or even be less than 2.5 goals although there are also many variations such like 0.5, 3.5 or even 4.5. This is also pegged to the end of the normal time. This type of football bet is quite a common one as it only involves two outcomes. In most cases, it is not difficult to predict low and high scoring games even if you do not know anything regarding what the final outcome might be.

Wins if 4 or more goals

Loses if 3 or less goals

Since Full Time Result appears quite simple to predict, many bettors try multiple bets in which they bet on several matches and try to correctly predict each of those results. However, it is often very tricky. If you get any prediction wrong, you lose on the bet. To enhance your chances of winning, read football accumulator tips first.

Under these types of football bets, one has to predict the correct score within the normal 90 minutes of football action. Scores are normally quoted as either Home Team Score or Away team score. The odds tend to be quite high because of the fact that there are several possible score lines for any match. However, predicting the right score and winning is not easy. To win in this football bet, you need to understand the scoring habits of your team.

This is also sometimes called double result and it involves predicting half time score as well as the score after 90 minutes all in one bet.

Below is an example of the manner in which the options can be quoted.

In the case of Man U vs. Man City, Man U-Draw means that Man U will be lading at half time but the final score will be a draw.

This involves predicting that a particular player will score the first goal. It has an option of “no goal scorer” which definitely means that there will not be any goal scored in normal time.

This bet is pretty much like the full time result bet but does not have the draw option.

You bet on either team winning by full time but if it is a tie, you receive your stake. Its disadvantage is that odds on each team emerging victorious will be reduced as a result of the draw.

It only has two outcomes of betting and you can bet on it very easily. That is Draw No Bet Explained.

Wins if Southampton win the game

This means correctly predicting the scores at half time. The score here also includes any goal scored even in the injury time of the first half.

If you feel that it is a tight game with no team willing to take risk of venturing forward, you can bet for a draw at half time.

This is a later version in which bookmakers give you the chance of winning in case your chosen player nets second or third goal of the match.

Half of the money that you stand to win goes on first goal scorer bet while the other half will be on the player scoring first, second or even third goal.

You will have something such as ¼ outright odds.

That is how Each Way Bet on First Goal Scorer works.

This is similar to first goal scorer bets although in reverse. Bookmakers normally quote the same odds for a given player to net last as to net first. You could exploit this bet if you understand your players and your team well.

Cash Out your Football Bets

One of the more recent types of football bets is the Cash Out feature. At Betfred you can Cash Out your football bets when you want. The video above showcases this punter friendly feature.

A new feature becoming common amongst online bookmakers is to cash out your bets while the event is till running. This gives you added control of your money. If you feel the game is about to turn against you cash out your winnings or stake before the match ends.

There are many different ways of betting in a football match through the various types of football bets.

Other than the common full time score bet, you can actually make a return even if your team loses. The above are the main types of football bets available at many betting sites.

Next time you go betting do not restrict your wagering to only one bet. You can choose to spread your bets by trying out some different bets. You just need to know you team very well.